Did you know that proper conditioning is important for your dog?

Operant conditioning involves using reinforcers and punishers to get the desired behavior or stop an unwanted behavior.

Reinforcers-generally speaking, this is something the dog likes. It is important to keep in mind that reinforcers are not universal and therefore depend on the individual dog. Most dogs like food, so using treats in training will work for most dogs. Some dogs prefer a tennis ball, squeaky toy, belly rub, or playtime with another dog or their handler.

Reinforcers are used to encourage the repetition of a behavior.
For example, a dog is asked to sit. If they sit, they get a tasty treat or a squeaky toy to play with for a minute.
Punishers- generally speaking, this is something that the dog doesn't like. Just like reinforcers, these also vary by individual dog. Some dogs don't like a stern verbal correction, some don't like being ignored or denied the opportunity to play. Most dogs don't like physical corrections because they are uncomfortable (or painful).

Punishers are used to decrease the repetition of a behavior.
For example, a puppy starts biting their owner's hand during play. The owner can say "no" and walk away as a punishment. The puppy is losing the opportunity to play and has been given a verbal correction.
I want to highlight again that there are many different types of punishers and many different types of punishers. In my experience, a lot of folks out there assume that a reinforcer is always food and a punisher is always pain. Since reinforcers vary by dog, how on earth could this be true?
I'll tell you a secret- it's not. I use both punishers and reinforcers in training: I don't limit myself to only rewarding with food and I steer clear of using physical corrections as punishers (we will get into why a little later).

The next part of Operant Conditioning involves the application of these reinforcers and punishers and here is where it gets a little tricky. I have included a couple of great visual aids that I had nothing to do with creating so I'll credit them to where would up when I did a google search of the quadrants of Operant Conditioning.
I'll start with the pretty pictures that I didn't put together:

This is from Fed Up Fred: 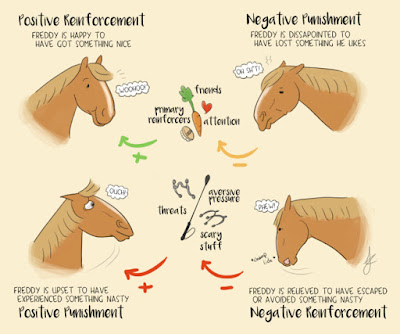 This one is from a dog training forum, originally from a ClickerExpo: 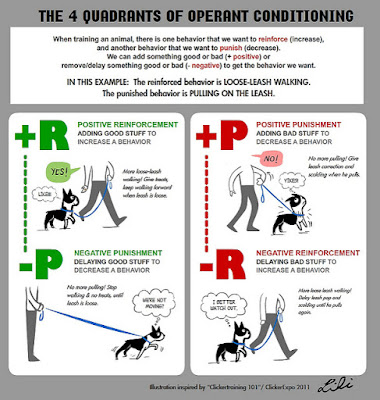 To use these reinforcers and punishers, we can give or take them away from our dog. Giving or adding a reinforcer/punisher is considered positive (+). Again, positive isn't necessarily a good thing, it simply means something is being added to the scenario as a result of the dog's behavior. It is being added to either encourage or discourage the behavior.
Taking something away from the dog is negative (-). Negative isn't exclusively a bad thing, it just means we are taking away something from the situation or from the dog. It is being taken away to either encourage or discourage the dog's behavior.
So, now we have reinforcers (R) and punishers (P); and positive (+), or negative (-) applications.
Take a look at those charts again, or just look at the one you like best.

R+ is Positive Reinforcement= something the dog likes is given to the dog to increase the behavior that immediately preceded it. The dog who gets a treat for sitting is getting positive reinforcement.

R- is Negative Reinforcement= something the dog does not like is removed in an effort to increase the behavior that immediately preceded it. Pressure from a choke or prong collar is released once a dog stops pulling on leash.

P+ is Positive Punishment= something the dog does not like is given to decrease the behavior that immediately preceded it. A "collar pop" is given as a response to a dog lunging on leash.

P- is Negative Punishment= something the dog likes is removed in an effort to decrease the behavior that immediately preceded it. A dog jumps to greet me as I reach for a treat- I immediately put the treat away and turn to ignore the dog- he has (momentarily) lost the opportunity for treats and attention, which he likes.

Now, remember earlier when I mentioned that people generalize reinforcement as treats and punishers as pain and how they are wrong in painting it all in black and white? Well, you can read that fourth paragraph again but I really did say it. I do use mostly R+ training, though I will use P- and R-.
Here are a few examples that I have used just this week:
-A dog who runs to me quickly and immediately when I call him will get a treat and lots of praise and attention as a reward (to increase that behavior). This is R+
-A dog who jumps to greet or play will experience me walking away, putting my treats away or will get a 5 minute time out if he can't be redirected from the jumping. Since he is jumping for attention, I remove the thing he wants to decrease the jumping! This is P-
-A dog who is fearful of men in hats will get more distance from that scary guy in the hat 20 feet away if he can look at me or sit when asked. Something he doesn't like goes away when he offers the behavior I want, which is paying attention to and trusting me. This is R-

P+ is the one I really do avoid using, but that does not mean I don't understand how it works. I know that it is meant to stop behaviors quickly since the dog will be trying to avoid something they do not like. I know it can work or seem to work on plenty of dogs, my concern is more with the fallout from using such methods. Some dogs will react quite adversely to corrections like this and become aggressive or reactive in defense. This is because we can't actually say to a dog "ok, you will be getting a shock or "collar pop" now, because you ran after that kid on a bike".  For all we know, the dog just wants to run and play with the kid on a bike, but he may have different ideas and need to attack those scary tires. All our dog knows now is that whenever a bike goes by, something not so fun happens. This is where aggression and reactivity can increase because of P+. The other thing that I have seen happen is a dog actually shutting down and becoming fearful of bikes, children or their handler. If you want to really ruin your day, read about Learned Helplessness experiments that were done on dogs in the 1960's. You may be outraged about the fact that it happened 50 years ago, but what I agonize over is the fact there are trainers out there using very similar methods today in an effort to extinguish behaviors and train basic obedience skills.
In addition, what usually happens isn't that a behavior is stopped- it's just suppressed. It may stay suppressed forever, or the dog can become like a ticking time bomb and one day they can't take it anymore. That's pretty extreme but I have seen it happen. I have seen playful, carefree puppies change to reactive, shut-down pups when a shock, prong, or choke collar is used. By studying canine body language, you can see for yourself that a dog who is being walked "under total control" is actually fearful and unsure. I don't know about you, but I'd rather my dog have a good time and be relaxed. So, yes P+ may work on dogs, but why take a chance on traumatizing your dog, ruining your bond and changing their personality?

For more on why I don't like to use P+, check out my post on how a "calm, submissive" dog is an oxymoron.

Next time, I will delve into using conditioning over time to ensure that your dog will respond in a variety of situations.


Excel-Erated Learning: Explaining in Plain English How Dogs Learn and How Best to Teach Them, By Pamela Reid

Don't Shoot the Dog: The New Art of Teaching and Training, By Karen Pryor