This week, I want to see if you paid attention to the last post. It's like a little quiz, with pretty pictures of cute pups and a great sense of pride if you answer the questions correctly.
So, last week time (was it three weeks now or a full month?!) I wrote about how dogs have basically three levels of communicating: whispering, talking, and yelling.
Here's a recap of the things you want to look for at each level:

Whispering: lip lick, short stare, slight head turn, scratching frequently or out of context (like in the middle of play), sniffing the ground out of context (in the middle of play or when meeting someone), leaning away, looking away, low tail, yawning, moving slowly
Talking: hyper-vigilant (looking around quickly), excessive yawning, panting when it's not hot, freezing in position, moving away, "whale eye" (looking so far in one direction that you see the whites of the dog's eyes), sudden loss of appetite, tucked tail, curved spine, dilated pupils, shaking/trembling, shaking off (this is a displacement behavior that we see frequently in play)
Yelling: lip lift, closed mouth, showing teeth, snarling, growling, barking, lunging, biting
Now, I have some outtakes from graduation photos. I love keeping these to look for little body language cues. In reality, the time from the first shot as dogs get lined up and that final shot where three out of four dogs are lined up for a half decent picture is three to five minutes. I probably get 30 pictures in this time, and each one can capture at least one different signal from each dog. Most of the time these dogs are just excited and want to play, but you still see the displacement and calming signals. My goal in training, especially in group class, is to keep everyone under threshold. That means you won't get the chance to see much "yelling" in these pictures. I'll work on that for next time.

First up, who in this picture is nervous, who is excited and who is blurring the line between healthy interest and play and over-the-top play? 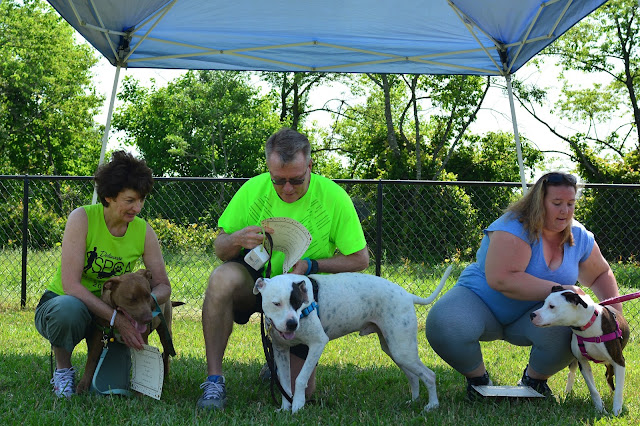 The lab-pit mix on the left has her ears pinned back, probably because she just wants to go play with her big brother next to her and mom is asking her to hold still.
The big mixed breed in the middle there is very uneasy with the dog all the way on the right. He is turning away, looking away and has a little paw lift going on. All of this tells the other dog that he is no threat and really doesn't want to do anything.
The pit mix on the right really wants to go investigate the other dogs. She is very sweet, but her normal play level would be way too much for the arthritic big guy next to her. Her weight is to the left- in the direction of the other two dogs. She wants to go check them out and her human mom is blocking her.

What do you think of this guy? Happy? Sad? Mad? Scared? A little warm? 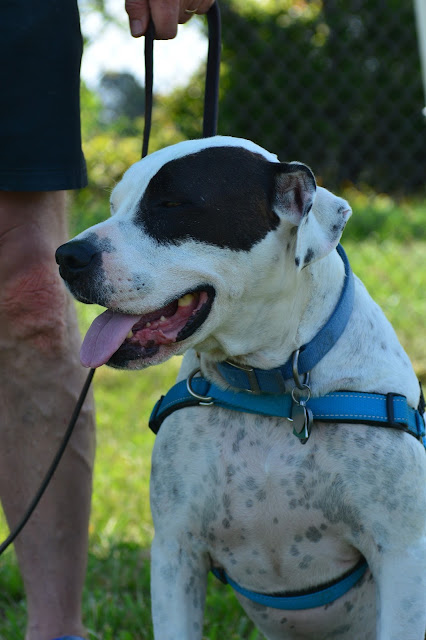 You may have to turn up the brightness on your computer, but look at Howie's eyes- he's squinting. It's not because it's bright out, but because he's uncomfortable with the fact that I had been taking his picture for a couple minutes at this point and he thinks the camera is scary.

Here is the first picture I took of him, about 35 seconds before the above picture: 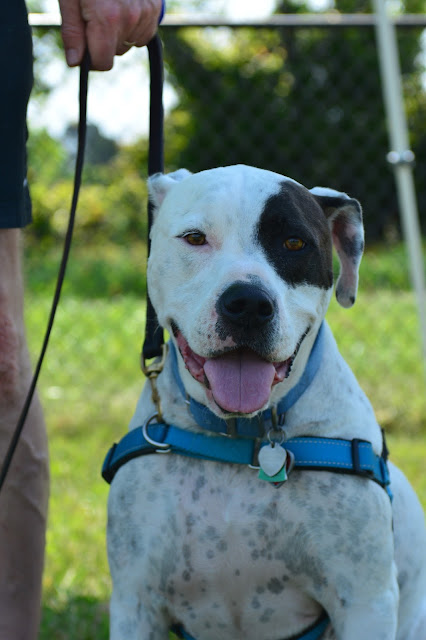 By the time I got that second picture, he was squinting and turning his head away from me, whereas here he is looking right at the camera. His ears are pinned back because he doesn't like the sound the camera makes when it takes the picture in addition to the big, scary lens. 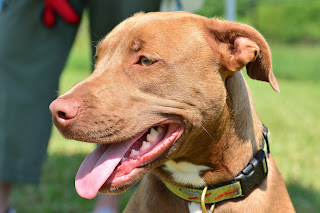 Contrast that with Gracie, who doesn't really care that I'm taking pictures. Her face is relaxed with the exception of her panting because it was about 80 degrees out on graduation day.

Next, is everybody alright with what's going on in this picture? 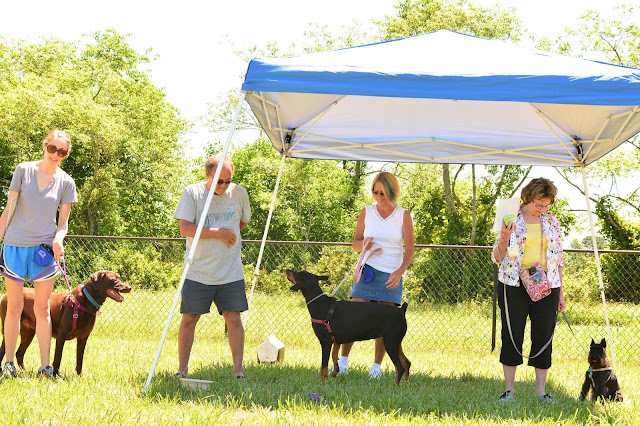 The chocolate lab on the left is watching the other dogs, because she wants to play.
The doberman in the middle is in the middle shaking off- she really wants to play with the lab but we told her she has to wait util class is over. This is the human equivalent of an exasperated sigh.
The little schnauzer on the right is really not sure about all this movement. She has a history of reactivity and the fact that she is at such a low stress level around two other dogs and four people who aren't mom is really good. She is still unsure- leaning away and looking away from the other dogs. I intentionally put her on the end next to the doberman for the picture because I knew the lab would be too excited to be next to her.

So they are all ok, because they are communicating well with each other and I won't make them maintain that close proximity too much longer!


Look close, how has the dynamic changed from the previous picture?