Book Review: It Doesn't Matter, Just Scroll to the Bottom for the Name and Buy This Book

I've been slacking lately. Actually, I have been working on a couple of posts that involve a bunch of research and I have been working with actual clients a bunch lately. So maybe "busy with other things" could be subbed for "slacking".
Anyway, I figured that a book review would be a relatively quick, informative post and I have read tons of books so at least that part is done already! 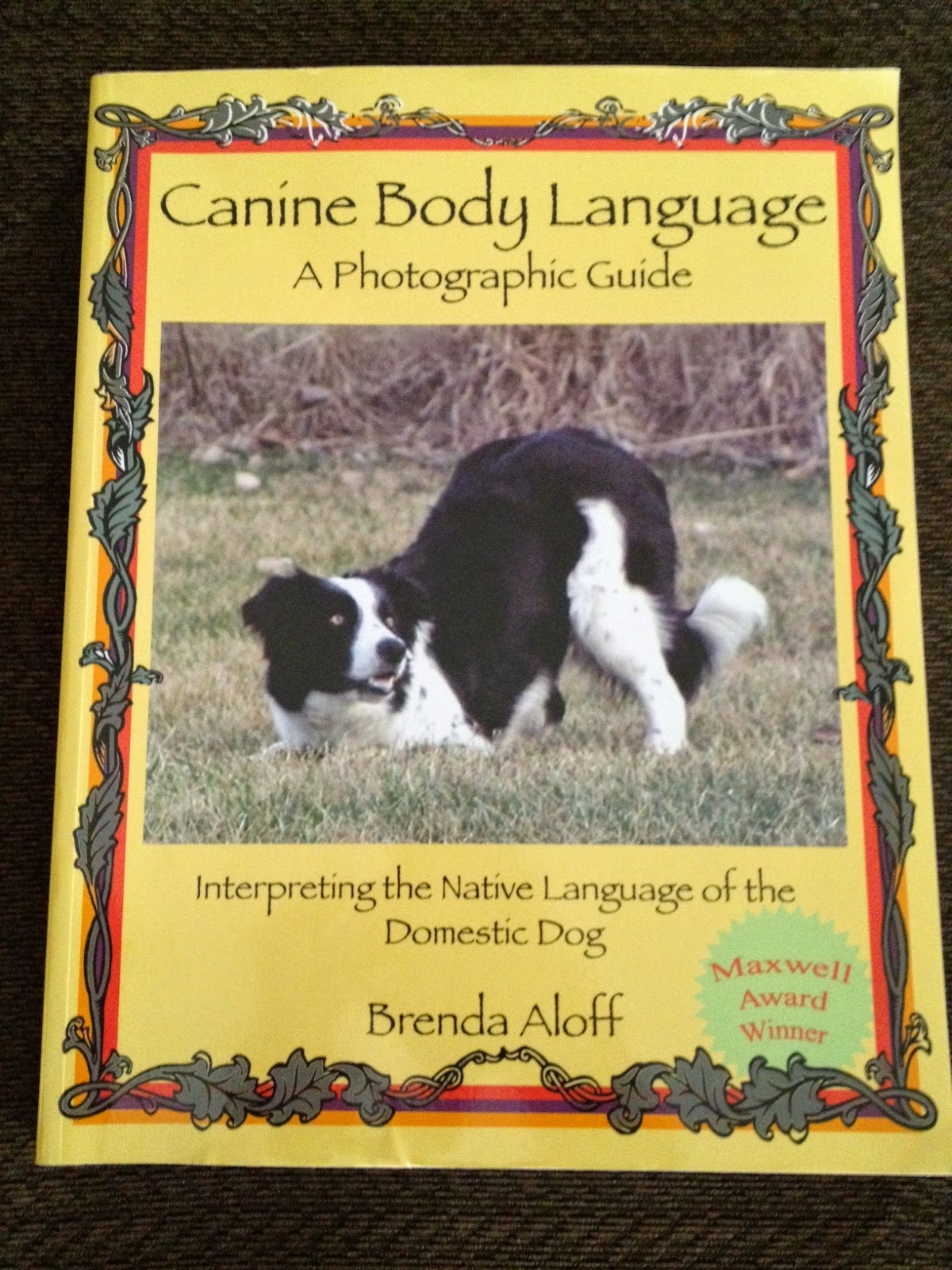 The first book I'm choosing is one of my favorites (I'll say that a lot, but I REALLY mean it this time). I have read it cover to cover like a novel a few times and I recommend it to clients constantly.
The book is called Canine Body Language: A Photographic Guide, by Brenda Aloff.
The title kind of takes all the mystery out of it, but I'll do a brief discussion just for fun. The book is all about canine body language, and interpreting the emotional state of a dog. Now, there are those who frown upon us trying to determine a canine's emotional state, because that's attributing human traits to a non-human animal, etc... but I believe that dogs are just as capable of us as feeling scared, happy, sad, stressed, angry, frustrated, and everything else we feel. You can disagree with me all you want, but after living and working with different animals my entire life I'm absolutely convinced that I've seen it. I'm going to list all the main topics covered by the book, followed by an example or two from each chapter.

Canine Body Language starts out with a review of determining a dog's emotional state. The first section reviews relaxed/neutral, confidence, curiosity, rolling, companionship, stress signals, fear indicators, caution, anxiety, avoidance, and smiles. Let's talk about an easy one to start with.
A 'relaxed, neutral' dog can look like, on different dogs and in different situations. In general, a 'relaxed, neutral' dog has no body tension anywhere, has a semi-open mouth, and is blinking normally.

The thing is, this (and everything) can look different on different dogs in different situations. Everybody thinks that a dog with a wagging tail is happy, and that is sometimes true. Check out my post on tails here from a few months ago. Dogs use their entire body to communicate, so to understand them we need to look at all of it. This includes, but is not limited to:
-Tail
-Mouth
-Stance/Body Orientation
-Ears
-Tongue
-Lips
-Eyes
-Overall tension (or lack thereof) in the body

To get an understanding of what a dog is (likely) feeling, you need to look at all of these, and the book gives great examples of pretty much everything. That's why it's almost 400 pages long.

I also want to point out confidence. PLEASE, PLEASE, do not confuse confidence with dominance. They are not the same at all. There can be elements of confidence in an aggressive dog, or a dog who is trying to control a situation (rightly or wrongly); and there can be confidence in a dog who is performing fantastically on an agility course. Confidence usually involves the body being forward to a degree but not too far, and of course you have to look at the rest of the body (seeing a trend here?).
Section two discusses Calming and Negotiation signals. Blinking, look away, tongue flick, sniffing, shake off, stretching, yawning, paw lifts, and puppy licking. A dog who is yawning is not bored with you (probably). A dog who is yawning is a bit stressed by something in the environment. That something may be a camera taking a picture of them, or another dog who is being pretty threatening.

Section three delves into more of the neutral and friendly indicators and signals. Butt sniffing, inguinal sniffing, friendly, greetings, the "I love you" stretch, pass by and look away. The pass by is actually a good, normal way to gauge how two dogs will like each other. I call it 'going for a walk', and it involves at least two people and two dogs. The dogs are kept on leash and walked past each other, like two ships passing in the night. The third person can be useful to look at both dogs at the same time so their handlers can focus on walking. If both dogs remain relaxed during a pass by, it may be safe to try a walk together. If one or both dogs exhibit predatory or over-stimulated behaviors, that's probably not the best idea (at least not yet).

Section four highlights responses to invaded space, including aggression, alerting, targeting, corrections, warning, and guarding. Targeting is a great example from this chapter. My Roxie demonstrates this perfectly when she sees a cat, squirrel or another dog. She leans forward, lifts a paw, has a high, stiff tail, forward ears, and is very still. It's actually the beginning of a stalking behavior and recognizing it as such can be a great way for pet parents to prevent a bad situation form happening or pick out your dog's favorite toy from the floor.

Section five reviews predatory behaviors, like excitement, prey bow, stalking, and chasing. The prey bow is often confused with the play bow, and this is where a lot of dogs (and their people) get into trouble. A prey bow indicates to dogs that the 'game is afoot' and there will now be motion. There is tension in the body (noticeably absent in play bow), the body is oriented backwards but in preparation to spring forward, head and tail are up (tail is down during play bow), and the mouth is generally closed (mouth is open during a play bow)

Section six is more lighthearted and is all about play! Normal play between dogs, play biting, play bows, role changes during play, prey-predator switches in play, conflict and taking breaks, and play that is turning into something else. People ask me all the time what normal play looks like between dogs. I tell them that taking breaks, taking turns and nobody picking on someone constantly are normal and that depending on the individuals playing, it may look a little rough. Reading through this book is a great way to have an idea of what's normal.

Once you get through the book, you can take the quiz in section seven and give yourself a pat on the back for doing so well on it! If you don't, you can always read it again.

I'll say it again, I love this book. I recommend it to everyone with an aggressive dog, or an anxious dog, or anyone who takes their dog to the dog park. I recently ran into someone who refers to it as the 'dog Bible'. I kind of agree. If I could send one to everyone for the holidays, I would do that instead of a holiday card.

If you really like it, here's a few links to buy it to save you the Google search :)