The Way A Puppy Grows

Maybe you don't have a mother and aunts who love to sing like mine, but I have this one stuck in my head from my aunt singing it to our son the other day: 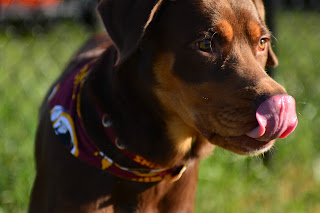 I'm certain they didn't come up with the catchy tune all by themselves, unless perhaps you ask them, but it got me thinking about the way a puppy grows. I did a post a few weeks ago about the importance of a good breeder, because that initial environment has a big impact on who that puppy grows up to be.

As an example of the impact, I have a client who has two dogs from of the same breeder, same bloodline, bought a few years apart.

The one pup (we'll say Fido for simplicity sake) is friendly, social and accepting of people and has been from the beginning. Their other dog (Fuzzy) is reactive, nips people and barks (a lot) and has since they brought them home. When they got Fido, they were brought into the house where the puppies and their momma were living with the human family. They were exposed to the family including children, older family members and cats. When they got Fuzzy, the dogs were staying in a nice house of their own without people constantly around. They were well cared for, clean and healthy looking.  Fuzzy's litter was not exposed to various people and other animals. Fuzzy is reactive and fearful, Fido is friendly and confident.

Let's take a look at what happens those first 8 weeks, before puppies even go to their new home, and why it's so important.

Neonatal Period: Days 1-12
The puppy is pretty helpless at this stage, eyes and ears are not open, motor skills are limited, cannot regulate their own body temperature and need stimulation (licking by momma) to pee or poop. Puppies in this stage will whine or cry to attract their mother's attention, and already has a sense of balance, taste, smell, touch and can detect changes in temperature (meaning they will move toward warmth). Even at this stage, the environment will shape the puppy. Gentle handling such as picking up and holding and moving to a slightly different surface for a short period of time (less than a minute) will help the puppy later on:

"If puppies are handled and exposed to mild environmental stressors, it can have a positive impact on them in later years. On the other hand, pups left undisturbed or raised in isolation during this time can be emotionally reactive when they reach adulthood. You may not see visible signs until they reach adulthood, because the signs are so subtle that the novice eye would not recognize them as a potential future problems." *1

"Mild stress of the neonatal dog, such as induced by handling or placing the puppy on a cool surface, increases the puppy's ability to cope with stress later in life" *2

Transitional Period: Days 11-21
Motor and sensory skills start to develop, eyes and ears open, and they start to walk instead of crawl with trepidation. Their teeth are coming in, so they can start on soft meals (sometimes regurgitated by their momma), even though they will still be nursing for a few more weeks. Louder vocalization occurs when they are left in a new environment and since they can hear, they will initially startle at noises. At this age they also start to navigate away from their nest or den to go potty, because they can go potty without mom's help and realize that they don't want to sleep near that. Up until this point, their sweet momma has probably been eating their poop. The puppy is able to adapt to new stimuli and develops the senses through experiencing new stimuli like handling, playing with toys, experiencing new types of floor, bedding and climbing on stuff (not unlike human babies). Play fighting will begin during this time and positive reinforcement training can be used to teach them (by their mom or their humans). An interesting side note, potty training is already starting at this point and what happens here will have a lasting impact:
"From this point on, the puppies should have the possibility to leave the nest site to eliminate. Puppies who have been thwarted from doing so may become almost impossible to house train." *3

Socialization Period: Weeks 4-14
Social play is the primary endeavor at this time, as puppies are learning social cues and subsequently, the rules of normal play. This is also the time when they learn all about people-what they are and what they do. Puppies can be taught cues and behaviors using positive reinforcement and they are learning about bite inhibition from their litter mates. Spending time with people and their litter will ensure a well-rounded dog who is comfortable in different social settings. Through play fighting, they experiment with biting, grabbing, shaking and holding. Puppies start to learn about bite inhibition when litter mates yelp at too hard a nip or grab. The yelp will (typically) stop play for a moment because of the alarming sound.
"Socialization to dogs and to people has to occur during this time. If this opportunity is missed, he puppy will most likely always be fearful of dogs and/or humans. During the socialization period, the puppy should also be exposed to all situations that it is likely to encounter during its life." *4

Hold on, Now here's a really important part of the Socialization Period:

Fear Imprint Period: Weeks 8-10 (or more)
At this point in development, puppies will retain fearful experiences/stimuli which they encounter.
"If 5 week old Beagle puppies were punished (e.g., with an electric shock for approaching a person), they shoed fear, but approached that person again when retested later. If the puppies were between 8 and 9 weeks of age, they retain the fear of that person...Any aversive experience during this time is to be avoided, since it may have lifelong effects on emotionality, anxiety, fear, hyperactivity and reactivity and aggressiveness." *5

That's it, just the first few months of a puppy's life and look at all that has happened in such short time! All of that stuff a puppy experiences before you even meet them for the first time really does impact who they will be.

There are more stages of development that your dog goes through, but we will stop here today because I've typed enough for one night and I think this is a good place to start. If you want to know more, you should check out the two books that I cited here, they are both great books.

*1:
Raising Puppies and Kids Together, by Pia Silvani and Lynn Eckhardt  Page 12

Raising Puppies and Kids Together, by Pia Silvani and Lynn Eckhardt (a great read if you have puppies and kids, btw.)

Small Animal Pediatrics, by Michael Peterson and Michelle A. Kutzler.